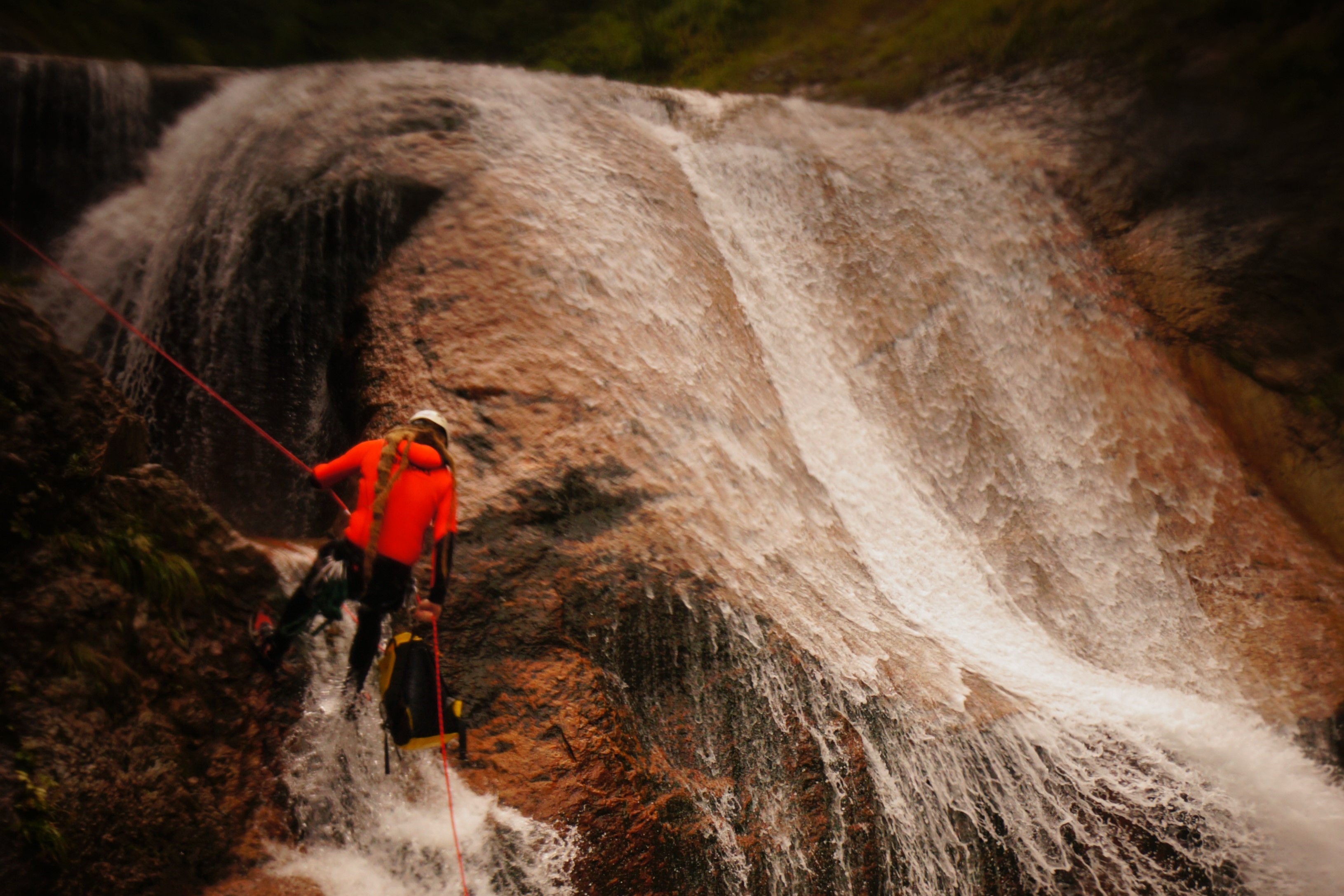 It all started in 1998. The emergence of Canyons.  I was just back from another season guiding in Nepal and had picked up some canyoning skills from the European guides, who were there to set up the first canyoning routes.  On my days off expedition rafting I would help them out carrying bolting equipment and got to "learn the ropes".

On arriving back in Japan in the spring of '98, I set about canyon hunting. Firstly in my adopted hometown of Minakami, then I ranged around the country as I found more info about huge waterfalls and canyons.  The internet wasn't so big back then, so it was pretty hit and miss sometimes. Go to 10 possible canyons and you might get one good one. I was mostly using "the 100 waterfalls of Japan" books back then until I found out about the "shower climbers". In Japan climbing up canyons had developed into a minor cult sport with amatuer enthusiasts out every weekend trying to knock more difficult and longer routes. I bought a few of their books to use as a guideline and it made the hunting task a lot easier. As the internet progressed amatuer waterfall photographers became another awesome source of info, with snaps of waterfalls and location info, I could gauge water flows, rock type and check out topo maps for the areas. The hunt was on!

The pioneering era is the most exciting. The rush of exploring unknown canyons, not knowing what the next bend will unveil. At times entering places humans had never possibly seen, or maybe not seen for 100's or 1000's of years. Encounters with bewildered looking wild animals was common. "What the hell are those humans doing in here?" It was also a humbling experience, learning that you don't have enough skill or experience yet and having to overcome some great challenges and hairy situations. I must have seen over 200 canyons in Japan by now, and the list still continues to grow.

There was definately a bit of cowboy sh&%t going on in the early days, but I guess that's how most industries start out. However, as my network with the world canyoning community increased so did me and my guides skills,  learning from canyoning legends like Rich Carlson (ex American Canyoneering Association) and Stefan Hofmann (ex Commission International de Canyon). This enabled us to push the boundaries further for both commercial routes and non-commercial "missions".

The pioneering was not only going on outdoors but also behind the desk. Everyone has this image that Japan is super highly regulated but when it comes to adventure tourism that is definitely not the case. In fact there is close to zero regulations. Coming from New Zealand where things are the total opposite this was hard to get my head around. I had to make things up as I went along as best as I could see fit. Make my own regulations; local rules, guide, operational and equipment standards. Mostly based of international best practice but many things had to be adapted to fit Japan. Many a day was spent talking with city councils, police, fire departments, mountain guides, national parks authorities and many other officials, often getting the run around as no-one really wanted to have anything to do with adventure tourism. WAY TOO RISKY! (If your a public servant desk jockey anyway)